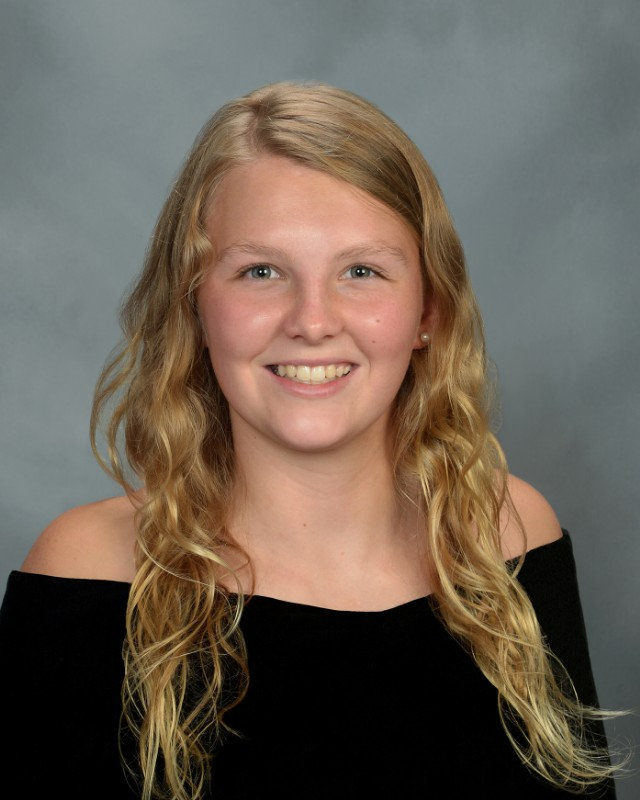 Whether she’s sprinting to the finish line, organizing the school newspaper, diving into the deep end, or flying a Schweitzer Glider, senior Amelia O’Brien will continue to put her best foot forward as she begins her journey at the Naval Academy.

“I love cross country because of the people. Just spending time with my team and running with them every day after school and hanging out on weekends makes it so worth it,” O’Brien said. “Cross country really is the most grueling sport in my opinion. You just run—which is really no fun—but having an awesome team next to you every step of the way makes it worth it and can make it a fun experience, even with the pain.”

This grueling lifestyle helped O’Brien become Bangor’s first female District XI gold medalist swimmer. Going from a freshman barely even earning a spot at districts and placing second to last, to standing on top of the winner’s podium her senior year, became a testament for what she had worked so hard for during her four years as a Bangor swimmer.

“Being Bangor’s first District XI gold medalist was definitely a huge honor. I would say that race was not one of skill or speed, but pure heart. I just wanted to win so bad and I wasn’t going to let a bad season stop me from earning my spot on top of that podium,” O’Brien said.

O’Brien brings her cross country and swimming skills with her onto the track, soaring past her opponents in long jump, triple jump, the 400-meter dash, and pole vault.

“I love the wide variety of athletes that come together to form a track team. I really believe there is an event for everyone in track. There are so many different things you can do and to be a good track team you need people who are strong in every event,” O’Brien said. “Last season, I was the Colonial League silver medalist in triple jump and I won bronze at the William Allen invitational for the same event this year.”

Inside of the classroom, O’Brien is a leader among her peers through distinguished clubs such as Student Government Association and Spanish Honor Society while also maintaining a rigorous schoolwork load and running the school newspaper, The Slater.

“I was involved in journalism for four years in high school and I just loved being in a class where the focus wasn’t on a grade but just improving yourself as a writer, learning new techniques, becoming a better communicator, and how to be creative. Every time I write an article it comes back covered in red marks but it helped me grow as a writer,” O’Brien said.

O’Brien also uses her journalism skills at the Civil Air Patrol (CAP), being a major contributor to their newspaper as the Pennsylvania Wing Head of Public Affairs.

“Civil Air Patrol is an Air Force auxiliary that introduces kids to aerospace and leadership. It is structured like the actual Air Force and is comparable to JROTC. The program has three main focal points: Aerospace Education, Cadet Programs, and Emergency Services,” O’Brien said.

In CAP, O’Brien went above and beyond and attained the rank of Cadet Captain, Cadet Commander and Executive Officer for two years on the local level, earned her Glider Solo Wings in 2016, and was the Pennsylvania Wing Head of Public Affairs in 2016 and 2017.

“Last summer, I attended Cadet Officer School on Maxwell Air Force Base in Alabama. This two week course is referred to as the ‘premier leadership academy of the Civil Air Patrol’ and highly competitive to not only get into but also pass. After spending two weeks attending classes taught by civilians and military officers alike (and even a 3 star general), I graduated with special recognition for excellence in writing for the papers I turned in throughout the course of the week,” O’Brien said.

As a result of her success in these organizations, O’Brien is confident the Naval Academy is the right place for her.

“The biggest thing CAP has given me is clarity in the direction I want to take in life and the confidence in my own abilities as a leader and person in general,” O’Brien said. “When I started out I was somewhat quiet and didn’t have full confidence in myself.”

The multitude of hoops O’Brien had to jump through for the Naval Academy—with only a 7% acceptance rate— makes applying for colleges look like a piece of cake. After applying and attending interviews with various people who have influence at the Naval Academy, O’Brien also needed a nomination from a senator or congressmen which required separate applications and interviews.

“I got my nomination from 17th District Congressman Matt Cartwright, but also applied with Senator Pat Toomey and got a nomination from him as well, but because I was already nominated by another source it was given to someone else.”

Now that the stress of entering the Naval Academy is over, O’Brien will use the next year to narrow down her options and find a major perfect for her.

“I do not decide my major until sophomore year, so I will make that decision then. I plan on trying everything and seeing what I enjoy most and find most interesting,” O’Brien said. “Right now, if I had to guess, I am leaning towards a major in either political science or computer science. Either one could lead to a career path post military service that would be attractive to me.”

O’Brien’s time at the Naval Academy won’t all be fun and games thanks to the six weeks of intense basic training she’ll endure.

“Over the course of the 6 weeks of plebe (freshman) summer, plebes are basically initiated into the military lifestyle. Physically, it is extremely intense and involves waking up early every morning and running and doing calisthenics,” O’Brien said. “It is also mentally difficult because you are in a new place, constantly pushing your body to the limit, and you have minimal contact with your family and the people back home.”

Although this program is extremely demanding, O’Brien knows how rewarding it will be in the long run.

“You also need to memorize A LOT. There is a book of information you get when you arrive called Reef Points and it contains pretty much everything you need to know to be a midshipman at the Naval Academy and more, and as a plebe, you must memorize all of it. Before arriving, I have to know the school’s mission statement and the 5th law of the sea,” O’Brien said. “But in the end, it is all worth it because you grow to trust your classmates and learn excellence in the physical and mental missions. It takes a lot of time and suffering, but it’s a learning experience and something that connects all midshipmen past, present, and future.”

On June 28 O’Brien will leave the small town of Bangor, Pennsylvania for Annapolis, Maryland and begin her monumental journey at the Naval Academy, making every Slater proud.