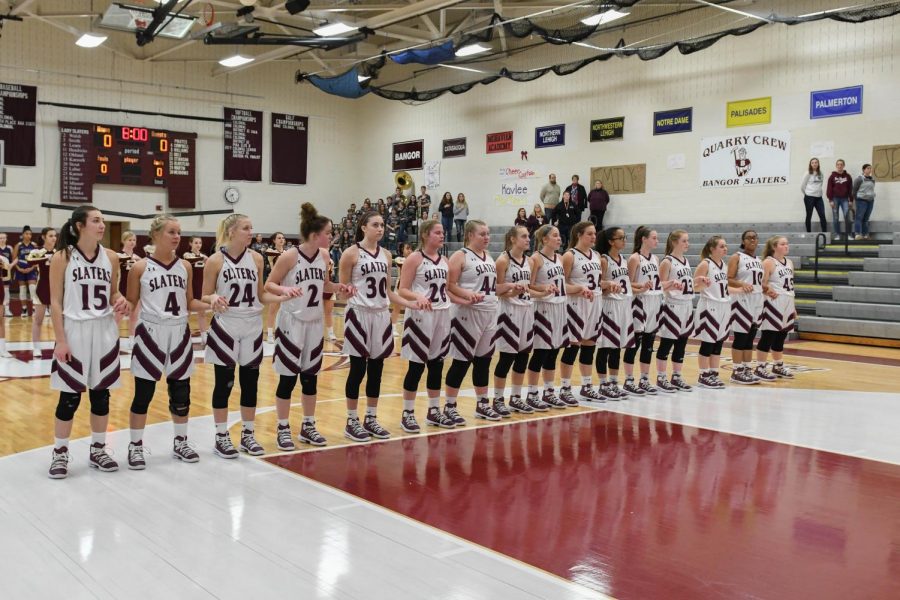 The Lady Slaters basketball team is heading to States as the runner-ups to the District 11 Champions after suffering a loss to the Southern Lehigh Spartans (53-28). The team will continue their season against Wyoming Valley West at Pittston High School on Mar. 9 at 6 p.m.

In the first half of the Districts game, the Spartans gained a 26-point lead against the Slaters. Fighting back, the Lady Slaters managed to put 24 points on the scoreboard by the third quarter, junior Morgan Karasek scoring half of them. Despite Bangor’s efforts, Southern Lehigh ultimately defeated the Slaters.

Growing as a team after the loss against the Spartans, the Lady Slaters walked away with new lessons learned. Working on their skills for their next game at States, the girls are excited to get back on the court.

The Slaters currently have an impressive record of 17-7. Under the direction of Coach Bisci, the girls have dominated the court for an entire season, including their big win against Pottsville (37-25), which sent them to the final round of Districts.

Senior Emily LaBar led the team with 15 points by halftime, with the team exploding in the second half. The girls increased 22 points to secure the win against the Crimson Tide. The team celebrated after their victory, with pride overflowing on the court.

The Slaters are looking forward to their first trip to States in seven years. Good luck Lady Slaters!