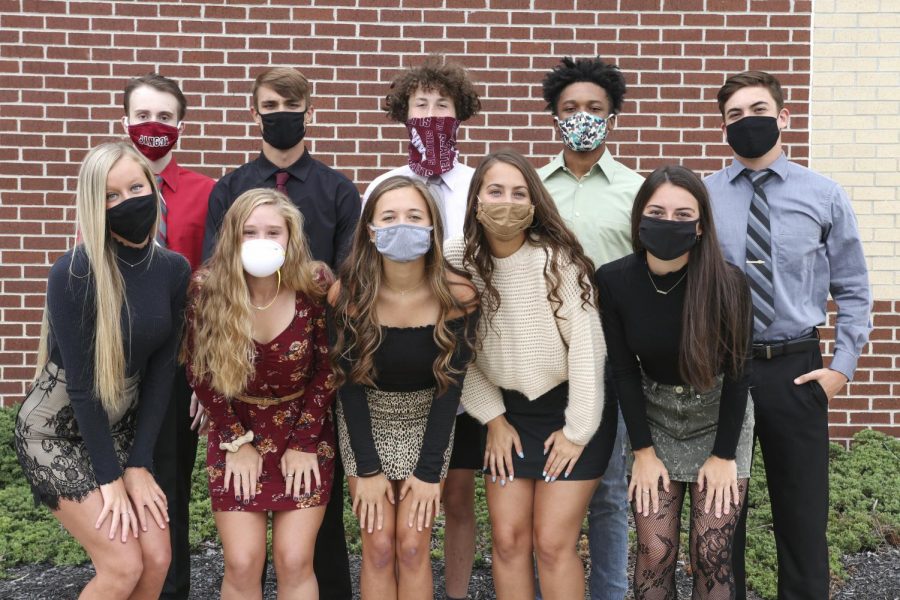 Congratulations and good luck to the 2020 homecoming court!

Fun-loving and energetic, Julia Dowd dedicated her time at BHS to Leo Club, French Honor Society, and the girls tennis as captain. She plans to attend a four-year college/university.

“I make myself laugh more than anyone else makes me laugh.”

“The Grinch is top tier. That is all.”

“Jacob Sartorius because he’s a joke and so is school.”

“I would live in my cabin in the mountains; it is peaceful, quiet and I’d get to spend quality time with my family and that obviously includes my dogs.”

“The soundtrack from the movie ‘The Breakfast Club,’ especially the song ‘Don’t You Forget About Me’ by Simple Minds. I chose this because I am an old soul.”

Well-rounded Slater Brooke Goffredo participates in a Student Government, Leo Club, Class Cabinet, and is also captain of the Slater cheer squad. She has worked hard to prepare herself to study at a four-year university and hopes to one day become a neonatal nurse.

“A fun fact about me is that I have never learned how to ride a bicycle.”

“‘Good Fellas’ is my favorite movie because what Italian wouldn’t love it?”

“If I could live anywhere it would be on the Florida Georgia Line, yeehaw.”

Captain of the field hockey team and manager of the wrestling team, Schippers has proven herself to be a hardworking and committed student athlete. She also gives her time to Leo Club and Student Government. Looking forward, Schippers will further both her academic and athletic career at Pace University where she will major in psychology.

“Once I fell 40 feet off a ski lift and didn’t break any bones.”

“The first ‘Ice Age’ because no matter how many times I watch it I still laugh at everything.”

“I would go to the 1780s because that is when they started delivering milk door to door. I hate going down to have cereal and there being no milk and having to go out to the store to get it.”

Kind-hearted Utess dedicated her time at Bangor to the girls tennis team as co-captain and participated in church youth group. Post graduation she hopes to live a life full of travel, adventure, and excitement. Whether that means college or not, Utess is prepared to go wherever life takes her.

“Anywhere near the beach, because who doesn’t love the beach!”

“Probably the ‘90s, simply because of the fashion.”

Captain of the soccer team Derek Filipkowski gives it his all on and off the field. He plans to further his love of school and study at a four-year university to one day become a teacher.

Athletic Slater CJ Miles represents the Slaters on both the basketball court and football field. He was named captain of the basketball team for his efforts and leadership skills. Miles plans to further his education at a four-year college and become an entrepreneur.

“Winning Clash of the Classes my sophomore year.”

“Sydney, because Australia is amazing.”

“Lil Uzi because it was an eternal high school career.”

Slater star athlete Jared Reto dedicated his time at BHS to representing the Slaters on both the football field and the wrestling mats as captain. He will further his love of athletics at a four-year university to study with a major of exercise science and a focus of physical therapy.

“My favorite high school memory would have to be beating Pen Argyl in football my sophomore year at their field.”

“‘The Lion King’ animation because I have always loved it since I was young and lions are my favorite animal.”

“Just the song ‘Sweet Victory’ from Sponge Bob could sum up my entire high school career.”

Stackhouse is a competitive and talented athlete showing off his Slater pride through his participation to both football and baseball. He plans to attend a four-year college/university.

If you could live anywhere in the world, where would it be and why?

“I wouldn’t change the location of where I live because I have truly enjoyed growing up in Bangor. This small town has so much pride and traditions that I now get to share with my family. I will always be a Slater and will continue to bleed maroon.”

“My favorite movie is ‘The Sandlot’ because it reminds me of when I was younger and played tournament baseball. I became friends with three players and will have those friendships forever.”

“The band ‘Fun’ could play ‘We Are Young’ because I enjoyed every second of my high school career and treated every moment like it would be my last.”

Inspiring senior Tommy Stackhouse battled Leukemia and showed what it truly means to have Slater strength. He also represented the Slaters as the varsity football manager and a bowling intramural participant. For his future, Stackhouse looks to prioritize his health and status of remission. Following, he plans to attend NACC for general studies.

“Orange Night when the entire Quarry Crew, my friends, family, teachers, and the community came out to support me during Leukemia awareness.”

“I wouldn’t change where I live. I love my town and being a Slater!”

“The ‘Rocky’ soundtrack because it tells the tale of struggle and then he finally succeeds.”